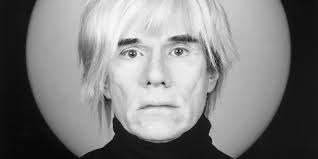 No other artist is as much identified with Pop Art as Andy Warhol. The media called him the Prince of Pop. Warhol made his way from a Pittsburgh working class family to an American legend.

Andy was born in 1928 in Pittsburgh as the son of Slovak immigrants. His original name was Andrew Warhola. His father was as a construction worker and died in an accident when Andy was 13 years old.

Andy showed an early talent in drawing and painting. After high school he studied commercial art at the Carnegie Institute of Technology in Pittsburgh. Warhol graduated in 1949 and went to New York where he worked as an illustrator for magazines like Vogue and Harpar's Bazaar and for commercial advertising. He soon became one of New York's most sought of and successful commercial illustrators.

In the sixties Warhol started painting daily objects of mass production like Campbell Soup cans and Coke bottles. Soon he became a famous figure in the New York art scene. From 1962 on he started making silkscreen prints of famous personalities like Marilyn Monroe or Elizabeth Taylor. The quintessence of Andy Warhol art was to remove the difference between fine arts and the commercial arts used for magazine illustrations, comic books, record albums or advertising campaigns. Warhol once expressed his philosophy in one poignant sentence:

"When you think about it, department stores are kind of like museums".
The pop artist not only depicted mass products but he also wanted to mass produce his own works of pop art. Consequently he founded The Factory in 1962. It was an art studio where he employed in a rather chaotic way "art workers" to mass produce mainly prints and posters but also other items like shoes designed by the artist. The first location of the Factory was in 231 E. 47th Street, 5th Floor (between 1st & 2nd Ave).

Warhol's favorite printmaking technique was silkscreen. It came closest to his idea of proliferation of art. Apart from being an Art Producing Machine, the Factory served as a film making studio. Warhol made over 300 experimental underground films - most rather bizarre and some rather pornographic. His first one was called Sleep and showed nothing else but a man sleeping over six hours.

In July of 1968 the pop artist was shot two to three times into his chest by a woman named Valerie Solanis. Andy was seriously wounded and only narrowly escaped death. Valerie Solanis had worked occasionally for the artist in the Factory. Solanis had founded a group named SCUM (Society for Cutting Up Men) and she was its sole member. When Valerie Solanis was arrested the day after, her words were "He had too much control over my life".

Warhol never recovered completely from his wounds and had to wear a bandage around his waist for the rest of his life.

After this assassination attempt the pop artist made a radical turn in his process of producing art. The philosopher of art mass production now spent most of his time making individual portraits of the rich and affluent of his time like Mick Jagger, Michael Jackson or Brigitte Bardot.

Warhol's activities became more and more entrepreneurial. He started the magazine Interview and even a night-club. In 1974 the Factory was moved to 860 Broadway. In 1975 Warhol published THE philosophy of Andy Warhol. In this book he describes what art is:

"Making money is art, and working is art and good business is the best art."
Warhol was a homosexual with a slightly bizarre personality. In the fifties he dyed his hair straw-blond. Later he replaced his real hair by blond and silver-grey wigs.

The pop artist loved cats, and images of them can be found on quite a few of his art works. One of Andy's friends described him as a true workaholic. Warhol was obsessed by the ambition to become famous and wealthy. And he knew he could achieve the American dream only by hard work. But his work didn't consist of signing innumerable of book pages, posters or cards as today everywhere offered.

In his last years Warhol promoted other artists like Keith Haring or Robert Mapplethorpe.